Tuesday, January 22, 2013
OKLAHOMA - Over its five-year history, Downstream Casino Resort has infused more than $1 billion of economic impact into the Tri-State regional economy, according to an independent study by KlasRobinson 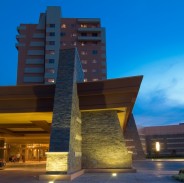 The Downstream Casino Resort is a very popular casino in Oklahoma.  Q.E.D. of Minneapolis, Minn.

"Five and a half years ago we stood out here in the woods and announced what we hoped to achieve: to create something that would benefit all the communities by providing good jobs, a foundation for sustainable economic development, and to serve as a good citizen and community partner," said Downstream Chairman John Berrey at a news conference Friday to share the study's results.

The report detailed the full history and scope of Downstream's economic impact in the region where Oklahoma, Missouri and Kansas intersect. Highlights of the report include:

-Overall impact is the result of direct impact dollars multiplying throughout an economy and creating induced and indirect impact - this is also known as the "ripple effect."

-Oklahoma Impact: Induced and indirect impact on northeast Oklahoma includes $10 million annually in total output and 87 jobs with annual earnings of $3.4 million. Downstream Casino Resort pays the state of Oklahoma more than $5.7 million in annual gaming taxes, and cumulatively has paid the state more than $29 million in all taxes.

-Future Impact: With the opening of its new Kappa hotel tower, Neé Spa and other amenities, total annual economic output is projected to reach almost $300.0 million annually, as well as creating a total of 1,880 permanent jobs with total annual earnings of almost $68.0 million.

-Upon completion of Phase II at Downstream Casino Resort, the expanded $361.0 million property has also created some 1,300 construction jobs to date.