Monday, August 10, 2009
LONDON, England -- An International Poker Network (IPN) player may have been surprised and disappointed when he lost a hand despite having Quad Jacks, however that disappointment soon turned to triumph 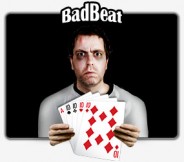 "I was so sure my four Jacks would take the pot. My heart sank when my opponent revealed four Kings to beat them," said the winner, known at the poker table as AlkaliEars. "But then I remembered that by losing with such a great hand I had won the Bad Beat jackpot!"

"The Bad Beat Jackpot was created to help ease the frustration of losing even when you're dealt great cards," said Mery Blomqvist, Head of Marketing and PR at GTECH G2. "With a jackpot requirement starting at Quad 6s, this has got to be the easiest Bad Beat Jackpot to hit anywhere!"

To qualify for the Bad Beat at IPN poker rooms, players must be at a designated Bad Beat table and use both pocket cards in their winning or losing hand. The losing hand must be four-of-a-kind sixes or better. Four or more players must be dealt into the hand.