PokerStars.comPokerStars is one of the Net's biggest poker sites and has dealt nearly five billion hands and run more than 20 million poker tournaments, awarding well over $4 billion in prize money. Greg 'Fossilman' Raymer is a regular at the site. 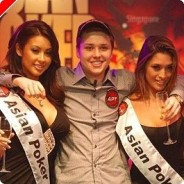 Yevgeniy "Jovial Gent" Timoshenko, a professional player originally from Ukraine, cut through the 2,144-strong field in the $5,200 No-Limit Hold'em tournament to take home the $1.7 million first prize. "It's a dream come true to win the largest and toughest online poker tournament ever assembled!" said Timoshenko.

It was a record-breaking eighth WCOOP series for PokerStars which continued its domination in the world of online poker tournaments with a total prize pool of $51,652,800 which is over $11 million more than last year's tournament series. Nearly 44,000 players from 140 different countries participated in the 45 events.

Of all the many triumphs in this year's series, it was probably French Team PokerStars PRO Bertrand 'ElkY' Grospellier who drew the biggest gasps when he won two major events at the end of series. After snagging a bracelet in the 1,269-strong NLHE $530 tournament, ElkY then won the $215 NLHE tournament two days later against a field of 9,220 players.

ElkY, who cashed a total of six times during the series earning more than $500k, said: "The WCOOP is a great series to play and the prize pool is enormous. No other online series compares to the WCOOP but I've playing it five years now and had never won a bracelet. When I won the NLHE $530 tournament, it was amazing – 1,169 players. But to win again two days later, I just couldn't believe it. More than 9,000 players, the craziest field, but I did it. My goal now is to win a WSOP bracelet for the first time, and become the first player to win two European Poker Tour events."

Daniel "djk123" Kelly, 20, won the Player of the Series trophy, as well as a trip to the Bahamas for the PokerStars Caribbean Adventure (PCA) in January after he cashed an astounding 11 times, came 4th in the Main Event and won bracelets in the $215 Razz tournament and $10,300 High Roller H.O.R.S.E. event.

All 2009 WCOOP bracelet winners will be awarded there bracelets at a special ceremony in the Bahamas at the PCA in January. To date there have been 166 WCOOP bracelet events since 2002 with a total combined prize pool of $156,855,050.