One of the most prolific and respected authors on the subject of gambling presents more than 75 of his previously-published articles from many other publications, now under one cover. In 8 chapters, he covers a wide spectrum of games, including the basics of craps. blackjack, slots, video poker, roulette and poker.

Craps: Take The Money and Run

Henry Tamburin's craps book covers the basic playing rules, gaming etiquette, and the mechanics of how the game is played in casinos throughout the US. It also provides thorough explanation of all the different bets on the layout, including how to make each bet, how it wins and loses, and what the casinos edge is. Other sections cover which are the best bets on the craps table and explanation of the author's successful Increased Odds playing system that takes advantage of the high multiple odds (up to 100 times) that casinos are now offering astute players.

Blackjack: Take The Money and Run 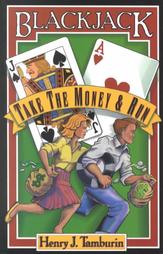 Henry Tamburin's most popular book on blackjack contains three levels of playing strategies. 1) For the beginner, a non-counting strategy that will give you a slight edge in some blackjack games. 2) The intermediate level strategy contains an introduction to card counting. 3) The advanced level playing strategy is a powerful system that will give the blackjack player up to a 1.5% edge over the casinos. The book also contains advice on which blackjack games give you the most profit potential, the risks involved in playing blackjack, how to play without fear of getting barred, and money management discipline.

Henry Tamburin is one of America's most popular casino gaming writers and has over 600 published articles to his credit. He is a skilled blackjack player, author of the best-selling book, Blackjack: Take The Money & Run, and featured in the instructional video Blackjack-Deal Me In. He is also the editor of the monthly newsletter Blackjack Insider, a must-read for blackjack players which features new columns and articles by the field's most noted experts and current playing conditions at casinos throughout North America.

Tamburin has bachelor and doctorate degrees in chemistry with a strong mathematics background that he puts to use to develop optimum playing strategies for blackjack and other casino games. He also taught at a university and he uses his teaching skills in the hundreds of gaming seminars and TV & radio appearances he has made to explain to audiences how to win at blackjack.

Presently, Tamburin is a featured writer for Casino Player Magazine,  Gaming South Magazine,  Jackpot,  Midwest Gaming & Travel Magazine, Southern Gaming, and Bingo Bugle. He continues to play and win at casinos everywhere and enjoys teaching other players in his courses and seminars how to do the same.

The Soft 17 Rule in BlackjackThe 'soft 17 rule' is a rule that requires the dealer to hit on soft 17. For many blackjack players, this rather innocuous rule doesn't seem like a big deal, but the fact of the matter it is.
Splitting Aces & Eights in BlackjackAlways split aces and eights. That is one of the golden rules for blackjack players but not according to a friend of mine. He insists that splitting eights against a dealer upcard of 9, 10, or ace is crazy because you are probably going to lose anyway, so why double your loss by splitting in blackjack?
History of Speed Count: - Part IFor the past three years, Henry Tamburin has been the Lead Instructor in the Golden Touch Blackjack in which he teaches average players the new playing technique called Speed Count. In this article he answers questions regarding this counting technique.
Enhancing Profits When Card CountingHow you can get more profit out of your card counting efforts is the theme of this article by Henry Tamburin.
Controlling Your Destiny at the Blackjack TablesHenry Tamburin knows that most players sometimes feel the casino (a.k.a. the dealer) is controlling their destiny. How many times can the same dealer draw that one and only card that beats your hand? But believe it or not, you have a great say in your destiny at the blackjack tables.
How to Play Elimination Blackjack TournamentsElimination blackjack is a new and exciting format for blackjack tournaments. The elimination format was created by poker pro Russ Hamilton, who also developed and launched the Ultimate Blackjack Tour (UBT).
How to Win Elimination Blackjack Tournaments - Part 2This the second part of an article on Elimination Blackjack, a new blackjack tournament format is being used in the televised Ultimate Blackjack Tour.
ReadyBetGo! HomeGambling OnlineCasino GamblingBlackjackCrapsPokerRouletteSlotsVideo PokerOur AuthorsBook ReviewsGambling News
© 2006-2020 ReadyBetGo!