Roxy Palace can really help you stretch your casino bankroll. The casino has games with more favorable odds than you would find at most casinos in the United States. Add to that the generous bonus that you receive just for signing up, and you are getting a lot of extra playing time for your gambling dollar.
Play Now at Roxy Palace!

CONNECTICUT - As reported by the Hartford Courant - Slot revenues at both Foxwoods Resort Casino and Mohegan Sun dropped about 12 percent in December, the casinos reported Tuesday, completing a 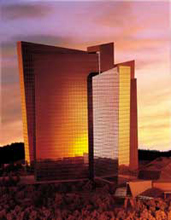 Foxwoods in Mashantucket raked in $44.2 million from slot machines last month, down 12.1 percent from the same month in 2011. Visitors put a total of $548.5 million into those machines in December, the casino reported.

Mohegan Sun in Uncasville reported $50.0 million from slot machines, down 12.2 percent from December 2011. Visitors bet a total of $616.0 million in the casino's slot machines in December, Mohegan said.

The state's two resort casinos contribute a quarter of their revenues from slots to the state. For December, Foxwoods contributed $11.6 million, and Mohegan contributed $12.5 million.

Foxwoods and Mohegan last posted a year-on-year increase in slot revenues in December 2011.