IntercasinoIntercasino is one of the oldest and most popular online casinos in the world today, including the latest Marvel Comic video slots including Blade, The Hulk, Punisher and X-men.

CryptoLogic Launches Jenga and Other Popular Board Games 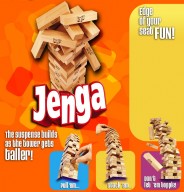 CryptoLogic introduces Jenga to their line-up of new downloadable casino board games  version of Jenga, one of the world's most popular and recognizable board games. The new game pack also features Buccaneers Bounty Video Slot Game and 4 Deck Atlantic City Blackjack. The games will be available exclusively at www.intercasino.com, www.casinojoy.com and www.dtdcasinos.com.

"Adding Jenga to our line-up is another example of CryptoLogic's ability to take the world's most popular branded casual games and turn them into a compelling, captivating casino experience," said Brian Hadfield, CryptoLogic's President and CEO. "Cryptologic's greatest strength is extraordinary e-gaming innovation — and that leads to games that are popular with players, and profitable for our customers."

Jenga is recognized worldwide as a game of suspense and strategy that is simple to learn and easy to play. This universally recognized classic game has been enjoyed by players around the globe for many years. Jenga now is available in CryptoLogic's colourful, feature-filled casual slot game.

CryptoLogic's new video slot Jenga is true to the Jenga experience: a surprisingly daring game that builds to a suspenseful climax. The game is an 18-payline slot game incorporating rich graphics, animations, and sound effects. Players can play either 9 or 18 lines, and win a maximum payout of 50,000 coins per game round. This game delivers the "Edge-of-Your-Seat Fun" that players expect from Jenga.

Did you ever want to be a pirate, complete with skull and crossbones, swords and a pirate's bounty? Here's your chance! Buccaneer's Bounty is a 20-line slot game with two adventurous bonus rounds and a chance to win up to 6,000 times your bet. You also have the chance to defend the island or be the pirate as the bonus feature gives you the option of two exciting games with two different perspectives.

Blackjack enjoys worldwide popularity. In this version, the dealer receives a second card (or hole card) before the players complete their hands (as is commonly found in most Atlantic City and Las Vegas casinos). Players also receive a higher payout percentage with a higher minimum bet than the standard 8 deck blackjack.

Boasting more than 280 games, CryptoLogic has one of the most comprehensive casino suites on the Internet today with games featuring some of the world's most famous action and entertainment characters. CryptoLogic has earned rave reviews from industry peers and players alike, and in 2009 earned Gambling Online Magazine's Top Casino Software award for the fourth consecutive year. Based on the votes of players around the world, it is widely considered the industry's top honour.