The Everything Craps Strategy Book 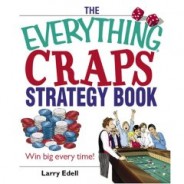 Larry Edell's Everything Craps Strategy Book is full of information for the aspiring craps player or for someone who wants to hone their craps skills. The book includes basic odds and theory overview, don't pass and don't come strategies, a discussion of betting systems, prop bet systems, and much more. Also included are sections on dice control techniques, craps tournaments, and an in-depth look at how to get complimentaries while playing craps.
Get it at Amazon!
Play Craps at Club USA Casino!

A friend of mine, David, just found out about Martingale systems - you know, the kind where you keep doubling up after a loss in a hopeless attempt to break even. So if you have a $5 pass line

Larry Edell has been the editor of 'The Crapshooter Newsletter' since 1994. He has published nine books and over two hundred different articles in magazines such as 'Casino Player', 'Gaming Today', 'Mid West Players 'and 'Gambling Times'.  Larry's website is www.thecrapshooter.com  bet and lose, the next bet would be for $10, then $20, then $40 then $80, $160, $320...and then you're usually up against the $500 casino table limit.

While driving to the casino, I tried to persuade him not to use his newfound Martingale system but he persisted, much to the dismay of both of our wives. He kept insisting that on the pass line, he would have to lose seven times in a row before he lost anything, and that was nearly impossible. However, if he did lose, he would lose $630, which didn't exactly please his sister, and she....well, let's just say she wasn't real happy since I was the one to teach David the fine art of shooting craps in the first place.

At any rate, I had to figure out some way of cutting down on his possible loses in order to keep peace at both his home and my own. When I get into these weird predicaments there's only one person I can ask, and that's Mr. Research. An idea was already beginning to form, and I asked David about it while we were still in the car. It wouldn't take much effort, and I was sure it would work. "OK Dave when you bet and lose on your system, what's the maximum amount of bets you can lose?"

"That never happens. If you look at the math, it's nearly impossible."

"Well, even if it happens just once it's too much. Look, if we can find someplace where you can bet your seven progressive bets, which would test your "nearly impossible" system, do you promise to STOP betting after the seventh bet?"

"Well, it would never take seven...." My wife glared at him.

Whew! Did it! Now for Mr. Research. I found one of the free gambling magazines that were distributed everywhere and started calling the smaller casinos. You can find out almost anything about every casino using those free papers. And if the information isn't there, you can always call the casinos on their listed toll-free numbers and ask them.

Finally, I found one with the proper requirements and told Dave about it. He frowned. "But that's a dinky little casino!" I countered, "Look do you want to continue to aggravate both your wife and your sister at the same time or not?" He sighed. "All right we'll try it. But what's so special about this place?"

"So's every other place."

"Their minimum bet is only 25 cents."

Well he played. And lost. Several times. But he stuck to his word and stopped after seven progressive losses per session. He won several times too, but just one loss always wiped out all of his winnings. Dave learned that if he wanted to play a progression (or almost any other system), he should test it at a casino that allowed the maximum amount of plays, and had a 25 cent starting bet.

Soon, Dave came up to us with a downcast face.

"I learned my lesson. No more Martingales."

My wife smiled up at me, but then frowned when David spoke again..

"Someone just told me about a system called a Reverse Martingale......."