LuckyAce Casino is a new white-label casino that uses 888 software, the same platform that powers one of the oldest and most respected online gambling sites on the web, Casino-on-Net.  LuckyAceCasino.com has all the most popular games including: BlackJack, Craps, Video Poker, Roulette, Keno and over two-dozen slot machines with better odds than a Las Vegas casino room. LuckyAce Casino does not accept US players.
Play Now at luckyacecasino.com!An In-Depth Review of LuckyAce Casino!
32 Vegas Top Spot for Gamblers

Comedian Lewis Black Performs at The Mirage May 23-24

LAS VEGAS, NV - Lewis Black, best known for his regular segment ‘Back in Black’ on Comedy Central’s ‘The Daily Show with Jon Stewart,’ will perform his hilarious stand-up 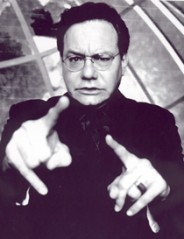 One of the most energetic performers in comedy, Black provides audiences with a passionate performance filled with lively rants about social absurdities and political blunders.  He exudes a rare form of satire that can ignite laughter within an audience, while still making an enlightening point about the world.

In the late ’80s Black left his career as a theater playwright in New York to pursue stand-up comedy full-time.  His first big break was in 1996, when a producer friend asked him to film a weekly segment for a new show on Comedy Central.  The piece titled ‘Back in Black’ aired on ‘The Daily Show’ and eventually became one of the network’s most popular and longest running segments.

Exposure from his appearance on ‘The Daily Show’ generated a record deal with Stand Up! Records and several comedy albums quickly followed.  Black also filmed two HBO specials, ‘Black On Broadway’ and ‘Red, White and Screwed.’  Other television credits include regular appearances on ‘Inside the NFL,’ ‘Larry King Live,’ ‘The Late Show with David Letterman’ and ‘Late Night with Conan O’Brien.’

In 2006, Black appeared in several movies including ‘Man of the Year,’ ‘Accepted’ and ‘Unaccompanied Minors.’  He also lent his voice to the animated film ‘Farce of the Penguins.’

In March 2008, Comedy Central premiered Black’s own comedy show ‘Lewis Black’s Root of All Evil,’ where he once again demonstrated his beloved funnyman rants for viewing audiences.

Black’s first album, ‘The White Album,’ was released in 2000 to much critical acclaim. He followed with six more, four under the Comedy Central Records label.  He received a 2006 Grammy nomination for his album ‘Luther Burbank Performing Arts Center Blues’ and in 2007 won a Grammy for Best Comedy Album for ‘The Carnegie Hall Performance.’

Tickets priced at $89, $79 and $69, not including taxes and service fees, are available at The Mirage box office and Las Vegas Ticketmaster locations (select Smith’s Food and Drug Centers and Ritmo Latino).  For ticket reservations, call The Mirage box office at (702) 792-7777 or (800) 963-9634.  Tickets also are available for purchase online at www.themirage.com or www.ticketmaster.com.