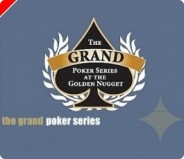 Grand, the property's luxurious events center, as well as hold cash games and much more, including special tournaments for seniors and ladies.

"We are pleased to bring back the Grand Poker Series for its second year," said John Colville, director of Golden Nugget poker. "Players were extremely pleased with the first series and we want to make it bigger and better this year, while still delivering the level of play and customer service our poker players expect."

The inaugural Grand Poker Series in 2008 hosted more than 15,000 players from across the globe, handing out in excess of $1.2 million in total prize money and raised more than $250,000 for charity through two celebrity charity tournaments.

Tournament games such as Hold 'em, Omaha, H.O.R.S.E. and Seven Card Stud, including pot limit, no limit and limit, will be held, as well as two bracelet tournaments. There will also be Super Sunday events which will feature a variety of No Limit Hold 'em tournaments with various buy-ins, daily cash giveaways totaling $1,000, and a $1,080 seat giveaway into the series' July 4th Grand Finale tournament.

On July 1, the series will hold the Susie and Howard Lederer Celebrity Charity Poker Tournament benefiting The Boys and Girls Club, where first place will win the unprecedented opportunity to star on NBC's hit poker program Poker After Dark. The tournament is open to the public and the winner will receive a $20,000 seat on the top-rated, late-night poker program, giving them the opportunity to win $120,000 in cash. Players can even win a seat into the charity tournament by playing in any noon Grand Poker Series tournament June 6 through 30. The $20,000 Poker After Dark seat will be donated by Full Tilt Poker.net and additional prizes will be donated by the Golden Nugget and other sponsors. No poker tournament has ever awarded a seat on a nationally televised 6-seat poker program with the chance to become poker's next television star.

For more information on The Grand Poker Series or for a complete schedule of events, visit www.goldennugget.com.