LAS VEGAS -- The most prestigious symbol in all of poker will have a new look in 2006.

For more than 36 years, winning a gold bracelet at the World Series of Poker has stood as the game's ultimate 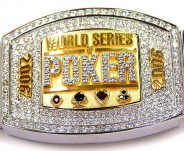 TRITON Jewelry, a division of Frederick Goldman, Inc., is developing the bracelets and a specialized line of jewelry for men and women modeled on its design. The new line, which will consist of pendants, bracelets, cuff links, rings, a key ring and a money clip, will feature the World Series of Poker logo and be thematically consistent with the champion's bracelet. The new line of jewelry will be available at independent jewelers and merchants in the fall.

This year's World Series of Poker will feature a total of 45 events in which players will have an opportunity to win a gold bracelet. Forty-four winner bracelets will be crafted from 14-karat yellow gold, enhanced with full-cut white diamonds. The center plaque is hand set with 66 diamonds weighing one-third of a carat and is supported by roughly 35 grams of solid diamond cut rope chain.

The champion's bracelet - bestowed upon the winner of the $10,000 No Limit Texas Hold'em Main Event - will be crafted from 14-karat white and yellow gold, with full-cut white diamonds. The plaque is handset with 170 hand-picked diamonds weighing more than six carats. The bracelet's center features uniquely shaped precious color stones to represent the suit designs - a heart-shaped ruby for the Heart suit, a princess cut-shaped ruby for the Diamond suit, a heart-shaped black sapphire for the Spade suit and three round black diamonds for the Club suit. The bracelet's plaque is supported by roughly 58 grams of solid diamond cut rope chain.

"This is a great opportunity for retailers to bring the appeal and excitement of the World Series of Poker home in a personal statement of individual style," said Jonathan Goldman, chairman of Frederick Goldman, Inc.

The World Series of Poker is the largest, richest and most prestigious live poker event in the world. In 2005, players from more than 40 nations took part in the World Series of Poker, generating a total prize pool in excess of $103 million. Main Event champion Joseph Hachem took home a record payday of $7.5 million.

Frederick Goldman, Inc. is one of the largest manufacturers of jewelry in North America. The company's brands include Goldman, ArtCarved, Diana Classic, Lyric and Triton.