BILOXI, MS - As reported by pokernewsdaily.com "In what was a grueling eight hour final table, Allen Carter – a player with only two previous cashes in his tournament poker career – 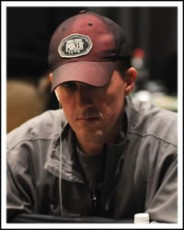 The action started on Thursday with 283 runners coming to the line for the only WPT event to be held in the southern United States. The field represented almost a 10% increase over last year’s field and is the first tournament in the current WPT season to have more players that the year before. By the end of Day One, there was a surprise for those in store as two women, Esther Taylor and Jacquelyn Scott, held the top two spots on the leader board.

Day Two would not be kind to those ladies or to another 145 people, as they were eliminated in what was a day of carnage for those on the felt on the Mississippi coast. Joining the Day One leaders on the rail were such notable pros as “Miami John” Cernuto, Scott Clements, T. J. Cloutier, Hoyt Corkins and 2008 WSOP Player of the Year Erick Lindgren. With only 27 players taking any prize money home - and a $1 million first place bounty for the winner - there were some notable players who lived through Day Two to take their shot at the title.

Day Three saw the field whittled down to the final six who would take part in the television taping of the WPT event. Poker News Daily guest columnist Bernard Lee was one of those who fell short of making the final table, but his 23rd place finish earned him a slight return on his investment. He was joined by other notable names such as Ted Lawson and Hevad “Rain” Khan on the rail as the final table was determined. With the eliminations of Tony Cousineau (8th) and Vanessa Rousso (7th), the final table was set for action..."