Tournament Poker and The Art of War

This is a book about understanding yourself as a player while understanding who you have to face in battle and learning to survive--a key element in no-limit poker tournament play. Risk, deception, exploiting a situation to your own benefit, waiting for the right time to eliminate an opponent, and adjusting your play accordingly are all factors to understand and master.

Testing you opponents, the power of keen observation, project a strong table image--these areas have been discussed in other books, but rarely with such keen examples, in short powerful bursts of advice.

Get it at Amazon!
Read a review of Tournament Poker and The Art of War
Bonus for Interpoker Accounts!

InterPoker makes new account sign-ups a breeze. They'll also give a 50% bonus worth up to $200 for all new players. With odds like that, what have you got to lose? InterPoker also has some of the best poker action on the Net, and offers a wide range of table limits and games.
Play Now at InterPoker!

I am often asked how to play AK.  My answer is the same as it is with the great majority of poker situation questions – it depends.

Here is a prime example of how you must consider all

David Apostolico is the author of 'Machiavellian Poker Strategy', and 'Tournament Poker and The Art of War,' and his latest title 'Poker Strategies for a Winning Edge in Business.'  David's website is www.holdemradio.com/blog/ 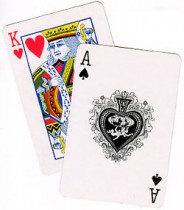 of the factors before making your decision.  There are no hard and fast rules.  In fact, in this particular hand, I played AK in a manner that I probably would not under just slightly different circumstances.

Here is the situation.  We are about three hours into a Professional Poker Tour event at the Bellagio in Las Vegas.  I am sitting on the button with about $8000 in chips.  At this point in time, I am below average but definitely not short stacked.  I am in no danger of being blinded out or having to make a move.  Since no one at our table had more than $12,000 in chips, I was still a viable threat against anyone.  The blinds are $100-$200.  Gary Bush raises to $600 under the gun.  Doyle Brunson calls from middle position.  Everyone else folds.  I peek at my cards and see AK off suit.  First premium hand I had all day.  I put my cards securely in place and think about what I am going to do.

The table had been playing very conservatively up to this point.  I figured that one of my opponents had to have a decent sized pair and the other may be playing a big ace.  I think I have three options here.  First, I can call.  Next, I can make a standard raise.  Finally, I can make a big raise.  Now, under different circumstances, I think this is a great situation to just call.  By calling, I hide the value of my hand.  I have position which gives me a lot of flexibility with the flop.  So long as both of my opponents miss the flop, I can probably make a play for the pot.  If I flop the ace, then I may make a decent amount of money from a hand like AQ.  However, in this particular case, I did not think I had much upside to calling.  First, I really believed one of them, if not both, had a decent sized pair.  If I did not hit the flop, one of them would bet out and I would be forced to fold.  Next, if I did hit the flop, I do not believe I would have made any more money.  If they had smaller pairs, they were too good not to fold to an ace.  Plus, I had already seen Doyle make some incredibly tough lay downs.  I just do not believe either player would pay me off.  Finally, if one of them was playing a big ace, then I was drawing that much thinner against a big pair like JJ or QQ.  So after a few seconds of deliberation, I decided to raise.

The next question was:  How much to raise?  There was now $1500 in the pot.  I would gladly take that money right now.  That would put me at $9500 and give me a little more cushion to work with.  An extra $1500 provides great leverage to parlay into more money.  I had already decided that I did not want to see a flop if I could avoid it.  I had to raise enough to force both players out.  Yet, I did not want to over bet and show desperation.  There was also the possibility that someone could move in on me in which case I was not sure what I would do.  I had to prepare for that possibility, however, so I wanted to leave myself with enough chips so I would not be pot committed and I would still have the option to fold.  I decided to make it $2200 meaning Gary and Doyle would each have to put in another $1600 if they wanted to play.  Both players folded without much hesitation.  Gary was clearly disappointed and stated that he really wanted to play his hand.  I asked him what he had and he told me pocket jacks.  I told him that I had the first big hand I had seen all day and I wasn’t going to lose with it.  I did not tell him what big hand as I wanted him to think I had AA or KK and that he did the right thing in folding.  I have no idea what Doyle had, but needless to say, I was happy with the result and gladly scooped the pot.

As with most situations in poker, do not get too cute if there is not much to be gained and more to lose.  If I had just called, I would have been left with $7400 in chips.  If I miss the flop and one of my opponents bets out $1000, I am going to be forced to fold.  If I did hit the flop, there was a chance that I might be able to pick up a few bets but I knew I was up against tough opponents who would not be likely to pay me off.  If I force everyone out pre-flop, then I am sitting on $9500 in chips.  I think a common mistake beginning players make is not to consider all the consequences of their actions.  Here the most likely possibilities were that I would end up with $7400 in chips (if I just call the $600 raise and am forced to fold on the flop) or $9500 in chips (if I raise pre-flop and force everyone out).  There was a potential upside to calling so that the $7400 situation could end up netting me more than $9500 if hit the flop and got some action.  On the flip side, there was a risk that someone could move in on me.  So there was a chance that the raising situation could leave me with less than $7400.  (If my raise did not work, I would be down to $5800.)  The two most likely scenarios, however, were still that I would be left with either $9500 or $7400.  If you learn to think in these terms, it will make coming to the correct decision a lot easier.

While I ended up being correct in this situation, it was a calculated risk.  The earlier stages of tournament play are all about accumulating chips while minimizing risk.  I thought I accomplished that here.  I may have missed out on an opportunity to gain even more chips, but I felt strongly that the extra $2100 in chips (the difference between $9500 and $7400) could be used now as leverage to gain more chips.

Of course, if I had been up against weaker opposition, I would have played this hand very differently.  Don’t think in absolutes when playing poker but analyze each situation individually.