Club USA Casino has burst onto the online casino scene and has won a lot of support from online gamblers.  Accepting players from around the world, including the US market, Club USA Casino has a wide variety of slots and games on offer.  The casino also has a good sign-up bonus and great customer support.  For fun casino action, check out Golden Casino.  Club USA Casino accepts US players.
Play Now at Club USA Casino!

Why Have Only Women In Women Only Poker Tournaments 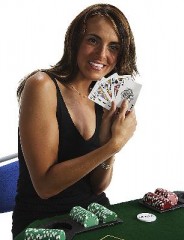 it shows itself. But are these people all men, and the answer is nearly a complete 100% yes. There are none of the top female players, many of whom are clearly strong people and some ardent feminists, sounding their horn on this matter. But that again has no significance because they are all in the business for the purpose of winning money, that is after all the fundamental reason people are playing poker. And if winning money is not your reason for playing poker? Stop playing immediately.

A very common reply from female players when asked why they shy away from playing more live poker, that is poker in the flesh against real people, is that it is intimidating and or an overtly unpleasant environment with male dominated banter. Tournaments for only female poker players seem innocent then in the attempt by organisers and poker businesses to encourage the participation of a hugely under represented section of the population. More players, more profit. More than this though is the idea that with more women in a poker room there may develop a higher level of policing against the trash talking which is so common in poker rooms.

Politically correct conversation in late night poker games is definitely some way off but in a world of unlimited competition for sponsorship dollars and TV airtime, presenting the game as an all inclusive world is the only way forward. The poker world grew massively in the first decade after the speed of the internet and playing devices made it a real time possibility for all who wanted it. After that period its been in stagnation. The number of online players hasn't increased and the participants in the World Series has remained static. This when everything else has been growing and some, like eSports, growing exponentially so that it dwarfs poker in viewing figures and in real people anteing-up their money to take part.

So what about men playing in women only poker events? Well ask Victoria Coren Mitchell. What she says can't be repeated but these guys are just what will kill any chance that poker had of growing in the future. So definitely have women only poker tournaments and put them on TV. Spicy banter will still flood the air but it will not be so puerile, unpleasant and tacky.

Compare poker with the casino environment. A much stricter set of rules exist here for the level of conversation as everyone is aware of the rules, the law, the need to keep their license and just plain common decency. There is a far greater female participation inside casinos, a place which is far safer than the normal night out anywhere, and not just for women.

This then has the mirror image in online casinos where there are no such sexist divides in the marketing and endless advertising that is all over your TV screens. Except that is for bingo which is a stronghold for women and no one is thinking of men only bingo nights because once again they are protecting the market.

Whenever you get offered some extra online blackjack bonus it was not because of your sex, it was because they want to keep you as a customer and value your pure business rather than a shortage of women. In fact it is strange that the casino execs who have expanded their bricks and mortar buildings to accommodate poker players have not paid attention to the sex divide between the two areas.

So poker has evolved with playing techniques, highly technical betting patterns, global reach with digital technology and not very much with gender discrimination and sexual harassment. Not that sex is on their minds, they gave that up long ago. Lets have more Women In Women Only Poker Tournaments!