Cancer fighter gets to play World Series of Poker event

LAS VEGAS, NV - As reported by USA Today: "Kent Senter, fighting blood cancer, wishes he had finished in the money at the World Series of Poker. But he calls just getting to play in the Las 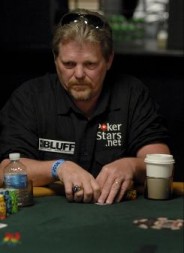 Senter, 55, of Pittsburgh, got to meet top poker pros and made it to the second day of the Main Event even though he is a novice. He was interviewed by ESPN. His kids were tickled when recording artist Nelly, who also played, visited their hotel room.

"It's been unbelievable," says Senter, who says his doctors have given him six months to maybe three years to survive Multiple Myeloma. ... Now, I'll just play it by ear, take it day by day and do what the doctor says."

He traveled to Las Vegas with his wife, Patty, and two of his four children, Tyler, 16, and Kaylyn, 11.

His expenses (travel, hotel and food) and the $10,000 buy-in for the Main Event were paid for by PokerStars, an online gaming company, with an assist in arranging the backing from Bluff Magazine..."