National Heads-Up Poker ChampionshipSixty-four of the world's greatest poker players will compete in this year's Heads-Up Championship. The official site will keep you up-to-date on all of the personalities, results and a schedule of when the tournament will air on NBC.

LAS VEGAS, Nevada -- Sixty four of the world's top poker players are going "all in" at the 5th annual National Heads-Up Poker Championship on March 6-8 in Las Vegas. Heads-Up brings a 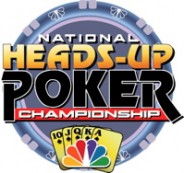 who's who of the poker world to the Caesars Palace Poker Tournament Room to compete in its distinctive, bracket-style head-to-head format for $1.5 million in combined prize money. GoDaddy.com, the world's dominant Web hosting domain registrar, is the presenting sponsor of the tournament, which will be broadcast on NBC over six consecutive Sundays in April and May.

"The popularity of poker has grown thanks in large part to television and the Internet," said Go Daddy CEO & Founder Bob Parsons. "Being an industry leader for domain names and Web sites, we only sponsor the most exciting events. NBC and Caesars Palace are assembling a top-notch tournament with world-class players and I look forward to seeing some great action."

Scheduled to appear in this year's event are several of the world's top poker pros, including returning Heads-Up champion Chris Ferguson and 2008 World Series of Poker champion Peter Eastgate. Also scheduled to compete are Doyle Brunson, Johnny Chan, Phil Hellmuth and Phil Ivey. Model and television personality Leeann Tweeden will once again serve as the sideline reporter/interviewer, with Craig Hummer and Ali Nejad providing commentary for the broadcast.

"The National Heads-Up Championship's exciting and unique one-on-one format creates the most compelling poker action anywhere," said Jon Miller, executive vice president of NBC Sports. "We've got another great lineup of talent for our fifth season, which will provide fans with the kind of riveting match-ups they have come to expect from our tournament."

The National Heads-Up Poker Championship features 64 top poker players competing in a series of heads-up (one-on-one games of No Limit Texas Hold'em) matches to determine the best heads-up poker player in the world. This tournament has a unique, single-elimination, bracket-style format modeled after college basketball's championship tournament, except that the finals are the best of three. The first-place finisher receives $500,000, with second-place taking home $250,000.

The first round opponents for the brackets will be chosen at random during the tournament's Draw Party held at PURE Nightclub at Caesars Palace on Thursday, March 5. The single-elimination competition begins Friday, March 6 and continues through Sunday, March 8, when a two-out-of-three championship match will determine the winner. The viewing gallery is open to guests on a first-come, first-served basis.