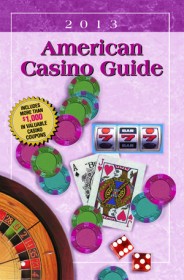 The new 2013 edition includes detailed information on more than 700 casinos in 40 states, plus it includes 203 coupons valued at more than $1,000! The coupons can be used now in 2012 and are valid until late December 2013.
Get it at AmericanCasinoGuide.com!
Read a review of The 2013 American Casino Guide
The Joy of Six Slot simulates craps action

Microgaming's video slot release The Joy of Six allows players the chance to experience the excitement of the enthralling game of craps. Based in a casino environment, the five-reel, 30-payline slot lets players throw the dice in a vibrant world of vivid graphics, craps animations and distinctive sound effects. The large variety of features within the game gives players many opportunities to profit from an enjoyable experience.
Play Now at Roxy Palace!

by Steve Bourie
Now that you’ve decided which machines to play, you’ll need some help with your playing strategy. The way to use the chart below is to look up the hand you’ve been dealt and make

Steve Bourie is the author of the American Casino Guide, the most comprehensive publication available for information on any U.S. casino/resort, riverboat or Indian casino. His guide has been published annually since 1992 and is now the biggest selling book in the U.S. on the subject of casino gambling.  Steve's website is www.americancasinoguide.com  the appropriate discards.  Be sure to hold the cards that you’ve found on the chart.
To use the chart just look up your hand and play it in the manner that is closest to the top of the chart. For example: you are dealt (6

) because a low pair is higher on the chart than a four-card straight with no high cards.  Remember to always look for the highest possible choice on the chart when there are multiple ways to play your hand. As another example: you are dealt (8

) because a three-card royal flush is higher on the chart than a low pair.  As a final, but radical, example of how to play your hand by the chart what would you do if you're dealt (6

)? Yes, you have to break up your flush by discarding the 6

and go for the royal flush because the four-card royal flush is higher on the chart than the pat flush.
When looking at the 9/6 chart there are a few things that should seem rather obvious:
1) A low pair is relatively good. Of the 31 possible hands, a low pair is #15 which means there are 16 hands worse than a low pair. If you look at the 14 hands that are better than a low pair nine of them are pat hands and guaranteed winners. Of the other five hands, four of them are four card hands and the remaining hand is a three-card royal flush.
2) Don't hold three cards trying to get a straight or flush. Nowhere on the chart do you see that you should hold three cards to try for a straight or flush. In some instances you should hold three cards to try for a straight flush, but never a straight or flush.
3) Rarely draw to an inside straight. Inside straights (6,7,_,9,10) appear only twice on the chart and only in rather bad positions: with three high cards or with four high cards. It is much easier to draw to an outside straight (_7,8,9,10_) where you can complete your straight by getting the card you need on either end. Open end straights appear four times on the chart and in much higher positions than inside straights.
4) Don't hold a kicker. A kicker is an unpaired card held with a pair. For example (8,8,K) or (K,K,9) are examples of hands where an extra card (the kicker) is held. Never hold a kicker because they add no value to your hand!
Keep in mind that the strategy tables shown here are only for Jacks or Better and are not valid for games played with wild cards such as Joker Poker, Deuces Wild, Double Joker, etc. Those games employ a completely different strategy and it would be wrong to use these strategies for those kinds of machines.
For your information there are exactly 2,598,960 unique poker hands possible on a video poker machine (when played without a joker). On a 9/6 Jacks or Better machine a royal flush will occur about once every 40,000 hands; a straight flush about every 9,000 hands; four-of-a-kind about every 425 hands; a full house about every 87 hands; a flush about every 91 hands; a straight about every 89 hands; three-of-a-kind about every 14 hands; two pairs about every 8 hands; and a pair of Jacks or better about every 5 hands. The interesting thing to note here is that both a flush and a straight are harder to get than a full house, yet a full house always has a higher payback than either of them. The majority of the time, about 55% to be exact, you will wind up with a losing hand on a 9/6 machine.
[ learn video poker! ]
© 2006-2015 ReadyBetGo!